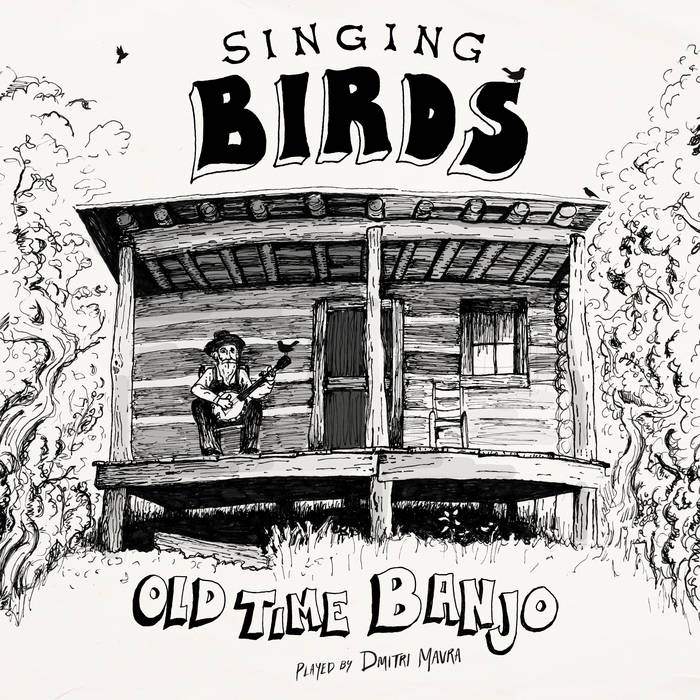 I recorded this album of solo banjo tunes almost 20 years ago. I misplaced the disc shortly after recording it and just found it last week. Lord knows, the world doesn’t need another solo banjo album! On the other hand, it probably can’t hurt. So I drew up a cover and here it is, two decades late.


Back then, I worked at a video production studio as a graphic designer. One day, the Boss showed up with a banjo for me to check out. He’d bought it in the 1960s when he was a young hippie working in a dulcimer maker’s shop in Arkansas, but he never learned to play. It was an El Cheapo made overseas somewhere and ugly as hell with an oversized yellow resonator and garish chrome flange, the exact opposite of what any respectable old time banjo player would want. Naturally, I loved it right off. I offered him 100 bucks for it but he declined. However, he told me that he would leave it at the office so I could mess around with it when I had time. Luckily, there was plenty of down time in those days when computers were slow and a few seconds of animation could take hours to process. Every few weeks I would offer him a bit more money, but even at $400 he refused.

“Nah, I might learn to play it when I retire,” he would usually say.

I was bummed, but I had plenty of banjos already so I just enjoyed “Big Yeller” at work. While the computers were rendering I would play and sometimes record a tune. Those halycon days soon ended when we relocated to a new office. In the process I lost track of the recordings and then pretty much forgot about them. The other day I was looking through some old boxes of "stuff" and to my surprise, there was the forgotten disc.

A lot of these tunes are still my favorites and I like how the recordings have a lo-fi sort of sound. I can almost imagine it arriving on a cassette from Folkways in the clumsy, powder blue plastic case they used in the pre-digital era. A few of the tunes were recorded at home on other old banjos. I don’t recall what I had at that time, except that the banjo used on Bright Sunny South was from the 1890s. I played these songs in the clawhammer, thumb lead, and two finger styles using a bunch of different tunings.

And Big Yeller? Years went by and when my son was born the boss man gave me the banjo and said, “Here, take it for your son."

Bandcamp Daily  your guide to the world of Bandcamp

New sounds from Mavi, Ivy Sole & Moderator, plus AJ, the One joins the show, for her latest release